We are having ideal weather for wild food to grow – rain, sometimes heavy, alternating with warm sunny days. Elderflowers are out; this means elderflower fritters first of all, and drinking last year’s elderflower wine. Then it will be making cordial and wine – just as soon as the rain stops for long enough to collect some nice fresh flowers. Fritters are delicious – I make a batter with one egg, some milk, beer or cider and enough flower to make a sticky batter, plus a teaspoon or so of baking powder. Last week I tried half a can of Guinness in it, but think it was maybe a bit heavy – cheap lager is better. If the oil is hot enough, it takes less than a minute to turn each one golden and fluffy. I like to sprinkle them with lemon juice and sugar, which isn’t very self sufficient, but good.

I’m very caught up with Hogweed just now. Such a common wayside weed, but absolutely delicious. Peel the young shoots or young leaf stems and cook like asparagus, toss in butter if you like. We had our first Plants with Purpose Foragers’ Ramble last Saturday and there was plenty of hogweed, out of bravado I chewed on a raw stem (you do these things when you’re being watched) – and it was rather good! But better as a cooked vegetable.

I won’t try to list all the edible plants we found on Saturday – there were far too many. But everyone had a good munch on the immature seed pods of Sweet Cicely, and plenty of wild salads were collected and sampled. I learned a new trick – one of the youngsters on the ramble demonstrated how to eat stinging nettles – so what you might say – but  raw?? Well, you grasp the nettle and roll it up tightly into a ball (I got slightly stung finger and thumb but if you get it right this shouldn’t happen.) You place the rolled up nettle leaf precisely between your back molars and chomp, without engaging the tongue. Scary, but it works!

The high point for me was finding Monk’s Rhubarb, a garden pot-herb that has escaped and naturalised but is not too common, and I’ve never seen it before. It’s another member of the dock family, also called Alpine Dock (Rumex alpinus), which has massive, heart-shaped leaves and long, purplish, rhubarb-like stems. There were several big specimens between the rivers Almond and Tay, no doubt deposited by river alluvium during some flood. Yesterday we went back to pick some to try – it was good, quite tough and on the bitter side mind. I was expecting that as it is apparently better through spring and later in the autumn, but becomes less enticing during summer. I did the usual “cook like spinach” trick, standard procedure for many wild greens; possibly will try next lot for longer cooking.

Another find which is easy to spot just now was Pignut. This umbellifer has very delicate flowers, is about 30cm tall, and has very very fine leaves, almost hairlike. If you are more skilled and fortunate than we are, you can trace the brittle stems down to the edible tubers. Be sure you have the landowner’s permission to dig it up though because otherwise it’s illegal.

Weeding the garden at this time of year produces lots of plants of Wood Avens, or Clove Root (Geum urbanum). The roots smell strongly of cloves and can readily be dried and crumbled to use as flavouring – or use them fresh of course. I do like this plant, but it is a bit of a thug in the garden so this helps control it!

Our next Foragers’ Ramble is the second Saturday in July.

Here is a recipe I used the other day for a Dock Pudding using mashed potato instead of oatmeal or barley. Oatmeal’s better, but I can’t have it at the moment because of the beeping Lent challenge, oddly enough I never grew a field of oats last year, perhaps I should try this year in case I ever have a silly idea like this again. The “docks” in question are, of course, Bistort (Polygonum bistorta).

Wash and cook all the above together like spinach. Drain, chop and add to mashed potato (think I had about 4 medium tatties). Beat in one egg, and seasoning to taste. Press into a pudding basin and place in a pan of water; simmer for about 25 minutes. (think you could also microwave it, but haven’t tried). Loosen in bowl and invert onto a plate. Garnish with primrose flowers or broom buds (or anything else edible I guess). It’s really nice, even if not oatmeal based.

I’m still feeling rough. Muttered to friend Janet about the odd cystitus symptoms which seem to be getting worse. “Have you been eating too much spinach” she asked. Ummmm….. yes….. It turns out spinach, rhubarb and probably most of the greens I’ve been living on cause a build up of oxalic acid, which CAN cause crystals in the bladder, which can cause infections….. looks like something I have to be careful of, if its not too late… going to see the doctor tomorrow. If I can’t eat greens, it’ll get even more boring.In the interests of my kidneys, I’ve drunk 6 pints of water today, think I actually prefer it to herbal teas!

Anyway, feasted on Solomon’s Seal shoots tonight; they’re bound to be bad for you because they are DELICIOUS. My son who’s a great cook, is home from Uni, which makes me wistful for one of his curries and envious of his dinners ( to be honest, I rarely envy my partner his meals, rice pudding straight from the tin does nothing for me!). 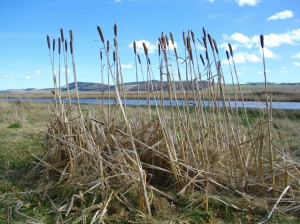 Tried something new in the wild food line – came upon reed mace (Typha angustifolia) by the Tay and extracted some young shoots. They were nice – a bit like asparagus, but tough outer layer needs to be removed. I think I’ll collect some more when they are taller, should get more for the effort. Typha’s an invasive, suckering plant, so no risk to wild population from taking a few shoots. Apparently the root is edible too (and indeed the flowers and even the pollen later), but roots looked a bit fibrous to me.

We’ve set dates for our Plants with Purpose Wild Food Rambles and workshop this week; you can get the details from http://www.plantswithpurpose.co.uk, or you will be able to once I’ve updated the webpage.

Ian from the church (who has previously cheered my dietary life with a bag of apples) has given me a big bag of potatoes from his farm! Suddenly I don’t have to eke out tatties for the rest of Lent – I have plenty. This is reassuring, and potatoes aren’t known as versatile for nothing. Having an abundance of them and very co-operative hens just now, I made a pile of savoury potato bubble and squeak “pancakes” – mashed potatoes, combined with beaten eggs, herbs, seasoning, onion and assorted greens, and fried. Very tasty – as a meal, accompaniment to breakfast, or a snack. Cottage pies of various  types come to mind – had I enough fat left I could even make crisps (but then I’m forgetting I don’t actually like crisps).

New foods appearing:
Comfrey, Ground Elder and other weeds for greens
Orpine, wild garlic and other wild plants for salads
MINT!!!!  and other aromatic plants at last for teas – which have suddenly become more palateable

The now rapid growth of spring greens (even seedling brassicas that I’ve sown are coming on now) means that I can have a rest from spinach. There’s still some in the freezer, but not much else veg wise, so I’m ekeing it out. With four weeks to go, I am nearly half way through Lent, and I think my body has now adjusted to the change in diet. My thinking has changed a lot – no longer panicking about what I am going to eat, no longer really thinking about it very much either. Sometimes I manage to make something really enjoyable like the potato pancakes, sometimes I think “oh no not another egg”, but I’m not craving other people’s food all the time now. I just know I can’t have it and so long as I’m not hungry Im not bothered. This is a new experience for me!

I realised I am still eating apples in mid-March from last autumn’s harvest, and enjoying them. OK so they have to be peeled and are a bit wizened and spotty – but perfectly edible. Normally I’d have fed any apples still hanging around by now to the hens. Now I value them and will be looking for varieties to grow that are good keepers.

Confess your sins Margaret. I nearly slipped today – the other half asked me to test his rice to see if it was ready and it got right to my mouth before I realised what I was doing. And then I needed to fry a potato pancake to go with my vegetable stew, and as the venison fat is running low, I decided it was both practical and allowable to fry it in the pan in which HE has just cooked a chop….. well it saved some fat, but the pancake did taste faintly and delightfully of pork…..

Discovered the first Tawny Grisettes (Amanita fulva) in a local wood – rather dry and battered but fingers crossed for rain and more. It dropped spores on the kitchen counter overnight but didn’t get et. Andrew reports Wood Sorrel (Oxalis acetosella) now a bit tough, but still lemony-sharp. Elderflowers have been picked and processed into wine, cordial and fritters so far. Gooseberry and elderflower jam in process of being made. Dryad’s Saddle (Polyporus squamosus) growing high up on the Birnam Oak – the last of the trees of Birnam Wood that DIDN’T make it to Dunsinane. Jack-by-the-Hedge leaves still good in salads (Alliara petiolaris). Wild strawberries mixed with garden raspberries and blended with home-made blackcurrant cordial make the most astounding smoothies. Tried some Brooklime (Veronica beccabunga) in salad – alright I suppose if you like a bitter taste. Gathered firewood from fallen branches.