I have just spent a few weeks in Morocco on a farm and travelling around and thought i would record some of the events here. Those of you who have visited this fascinating country will be familiar with much of what is to follow!

I failed to secure a hostel in any of the Spanish enclaves so plumped for the longer ferry from Algeciras in Spain to Tangiers Med port.A lovely way to enter Africa, but not without a last breakfast of Eggs and bacon on the ferry.

Then refusal to pay 200 dirham for a grand taxi toute seule, ( thanks Lonely Planet my trusty companion ), and eventually got crammed into one with 4 others for a mad dash to Tangier bus station for 30 dirham. And there I enjoyed my first chaotic experience of the bus stations in Morocco, albeit with a few exceptions like the lovely CTM one at Tetouan. Anyway, I now knew to look for shared lifts, and waited patiently for a cheap shared grand taxi to Assilah. There’s always a headman ready to guide you …its actually quite a good system. But good to get away from that busy place and arrive at the wee town of Assilah by the sea ( though crammed in with 6 others this time! ) .Miles of beaches along the coast en route. 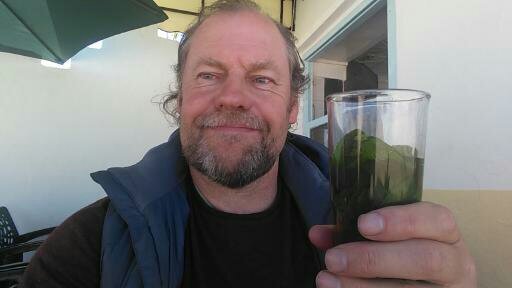 My memories of this place are of children moving to and from school at all times of the day, great mint teas, Spanish being spoken, prayers called at 5am, and the one shop with beer for sale! 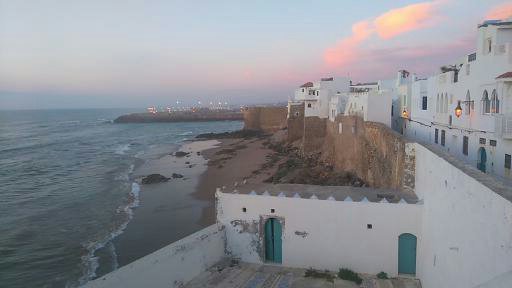 Oddly enough now I don’t have to drink herbal teas, I’m really enjoying some of them! Mints are growing  now, so lots of choices – chocolate, basil, apple, eau de cologne… or shall I just have peppermint? All taste so fresh, so green and lively. Mind you I am inundated with orders for mints that are really hard to keep up with given the slow start into growth – must be the herb of the year. Bistort is everywhere just now, and I’ve been making more traditional dock puddings, using oatmeal and a little chopped bacon with the variety of wild leaves around now.

River floodplains throw up some odd edible plants at times – in an old orchard next to the River Tay at its tidal extent Andrew found not only Ramsons (Allium ursinum), but also Three cornered leek (Allium triquetrum) and what we think was Field Garlic growing wild. They went into a salad to go with the first barbecue of the year last weekend. On a field trip with my countryside students this week, we enjoyed snacking on fresh lemony-sharp leaves of Wood Sorrel – a real appetite stimulant. We harvested a few juniper berries from the wild trees near Rumbling Bridge; they add a fantastic aroma and taste to game dishes. It was nice to note the pretty, bell-shaped flowers of the blaeberry or bilberry up in the hills, promising a harvest to come. Had another taste of bracken shoots, but I remain unconvinced. I don’t like the texture and the taste is woolly and bitter. Better wayside snacks are brand-new lime leaves, hawthorn shoots and the first broom buds, tasting of new pea pods, all available now.

Blackthorn, along with cherry blossom, seems to be very floriferous this year – I have noted where to go for sloes, but must find something other than gin to make with them, as we never seem to drink it all! Andrew’s explorations of relict orchards have identified potential pears in the autumn; we are looking forward to apple blossom time – just beginning here with our James Grieve wonder-tree against the shed.

Who else is back? HIRUNDO! the first swallows were spotted in Bankfoot on Sunday……. and an orange-tip butterfly…….. the ospreys are home, to and busy breeding…… St. G’eorges Day tomorrow – look out for St George’s Mushrooms! (and the dragons who got away).

Here is a recipe I used the other day for a Dock Pudding using mashed potato instead of oatmeal or barley. Oatmeal’s better, but I can’t have it at the moment because of the beeping Lent challenge, oddly enough I never grew a field of oats last year, perhaps I should try this year in case I ever have a silly idea like this again. The “docks” in question are, of course, Bistort (Polygonum bistorta).

Wash and cook all the above together like spinach. Drain, chop and add to mashed potato (think I had about 4 medium tatties). Beat in one egg, and seasoning to taste. Press into a pudding basin and place in a pan of water; simmer for about 25 minutes. (think you could also microwave it, but haven’t tried). Loosen in bowl and invert onto a plate. Garnish with primrose flowers or broom buds (or anything else edible I guess). It’s really nice, even if not oatmeal based.

I’m still feeling rough. Muttered to friend Janet about the odd cystitus symptoms which seem to be getting worse. “Have you been eating too much spinach” she asked. Ummmm….. yes….. It turns out spinach, rhubarb and probably most of the greens I’ve been living on cause a build up of oxalic acid, which CAN cause crystals in the bladder, which can cause infections….. looks like something I have to be careful of, if its not too late… going to see the doctor tomorrow. If I can’t eat greens, it’ll get even more boring.In the interests of my kidneys, I’ve drunk 6 pints of water today, think I actually prefer it to herbal teas!

Anyway, feasted on Solomon’s Seal shoots tonight; they’re bound to be bad for you because they are DELICIOUS. My son who’s a great cook, is home from Uni, which makes me wistful for one of his curries and envious of his dinners ( to be honest, I rarely envy my partner his meals, rice pudding straight from the tin does nothing for me!).

Tried something new in the wild food line – came upon reed mace (Typha angustifolia) by the Tay and extracted some young shoots. They were nice – a bit like asparagus, but tough outer layer needs to be removed. I think I’ll collect some more when they are taller, should get more for the effort. Typha’s an invasive, suckering plant, so no risk to wild population from taking a few shoots. Apparently the root is edible too (and indeed the flowers and even the pollen later), but roots looked a bit fibrous to me.

We’ve set dates for our Plants with Purpose Wild Food Rambles and workshop this week; you can get the details from http://www.plantswithpurpose.co.uk, or you will be able to once I’ve updated the webpage.