An unusual occurrence this year! Well not the drought, but I am genuinely astonished to see little Cox Apples growing this year on an M26 open grown bush tree. In it’s 7 years this is by far the most productive season.

Cox Orange Pippins, to be correct, are a very well known late ripening sweet, with a hint of acid, apples familiar to us all in the supermarkets. We have been developing this fruit in Kent for a century, to the neglect of many more easily produced varieties. Because in fact it is notoriously difficult, even in good summers, needing a lot of spraying and watering. And for the commercial grower, it just isn’t as remunerative as other moderns.

But, hey, we like to munch this little apple in January don’t we? It is the “crisp’ that all my customers refer to in their choice of variety. It is thought to be derived from Ribston Pippin, which is altogether a much more vigorous tree though not that productive in Scotland either. Except for this year with a good number of fruits appearing on my trees. I look forward to tasting this highly esteemed Parent of Cox!

If you have a nice south facing wall, then yes go for a Cox, preferably the self-fertile clone. Otherwise, go for Sunset, the nearest option. Again quite small, but productive in my garden and elsewhere.

Charles Ross has some Cox parentage, but it is larger, and really a dual purpose apple. It has that characteristic russetting though.

Jupiter is the triploid version, its big, ribbed and very colourful. It makes for a spectacular sight in September.

Kidd’s Orange Red has many similarities, its larger too and a late ripener, and a lovely flavour.  Tydeman’s Late Orange is another Cox hybrid, being crossed with Laxton’s Superb it makes a nice late dessert. 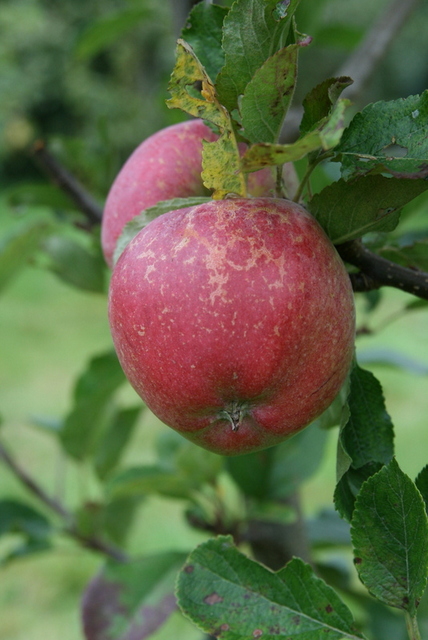