Medlars are rather plain looking trees – admittedly they are rosaceae, but the flowers are just white amongst many other better rosaceae, so why are they of interest? They have been cultivated for thousands of years, and its very likely the Romans brought them here.
Well its the fruit, which is not quite like anything else! They are actually pomes, and are brown, earthy tasting and either hard or soft and almost rotten! They are about 5cm across and brown.We tried some at The Harmony garden at Melrose once, and they were definitely an acquired taste. They are in fact a useful late fruit as they aren’t ready until mid- winter.
So what are they used for. Traditionally they need to be ‘bletted’ i.e. until the frost has softened them. Some suggest this isn’t actually necessary.However, the best use of them is to make into jam or jelly.
They will grow almost anywhere, I have seen them at Kellie Castle in the lawn, and in a hedgerow at Broughty Ferry. Remembering where they are and getting the fruit is important if they’re in a hedgerow. 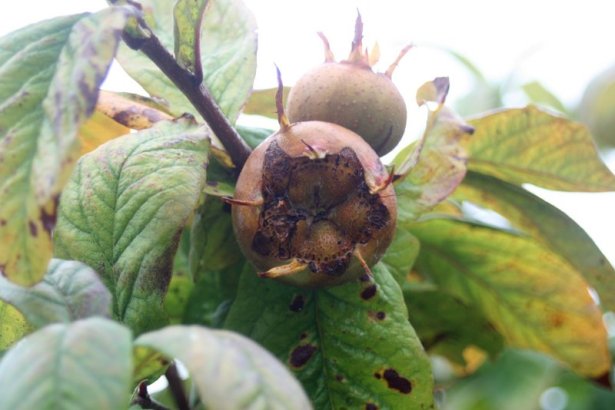 Varieties generally available are the Dutch ( largest fruit), Nottingham ( more upright), and the Royal ( better flavour). Also Breda Giant and Russian clones. We sell Nottingham. All are self-fertile.Named varieties can be grown on Pear, Quince or Hawthorn. They come from the Caucasus, so cold winters and hot dry summers are a clue to their requirements. The dry warm soils of Broughty Ferry is probably about right. Bob Flowerdew suggests only remedial pruning as they fruit on the ends of shoots.

The RHS suggest the following: ‘’pick when the stalk parts from the tree in late Autumn, and dip the ends in in strong salt solution to prevent rotting…..store with calyces downward, on slatted trays. Use when the flesh is brown and soft’’.

Ooh I almost forgot to mention, they have lovely autumn colour!