I have just made a brief foray to Mull to give a lecture on apple growing, and have been so impressed with the horticulture I saw that I am tempted here to record some of it.

I stayed in Dervaig on the northwest of the island, which stands near an inlet not far from the sea. In several of the back gardens i could see some mature apple trees, two of which were codlins, probably Mank’s Codlin, and a rather russetty small conical apple. This was reminiscent of D’Arcy Spice or Duke of Devonshire. A hint of sweetness, i’m guessing it would make a good cider. Also came across a golden hop plant with ripening hops in abundance….now there’s a business idea? 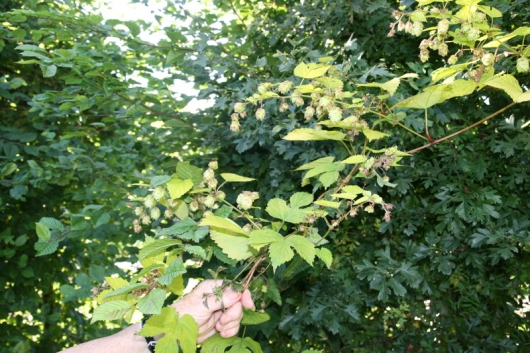 A visit to the private Quinish Estate walled garden revealed a collection of some 30 year old apples, many of them Scottish varieties. , unfortunately much overgrown by other trees and too poorly fruiting to identify with certainty. Simon, the gardener there, was well on his way to opening up the garden to its former glory again. I look forward to the day when this garden is open for visitors again.

One of the residents in Dervaig shared with me some photos of  their fruit trees in a polytunnel, a good option if wind and rainfall levels are just too restricting for top fruit. 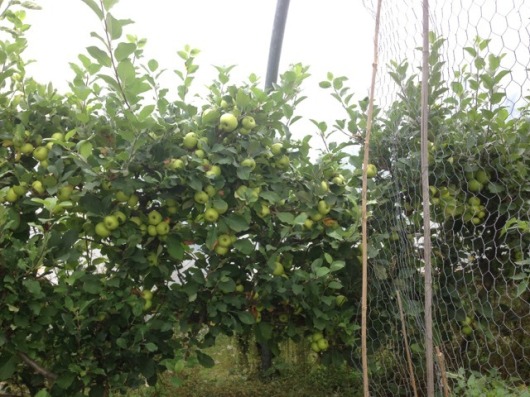 Heading north and east, I then stopped by at the Isle of Mull Cheese factory, and was very impressed with their wee garden. Nicely laid out. There is also a fine black grapevine in the cafe. On down the Glen is a large walled garden next to the Castle, where a young couple are producing a full range of vegetables outside and in tunnels for a local box scheme and the farmers markets. Its four miles down the Glen, but well worth seeing. They should be up and running with some walled trained fruit soon this winter too. Fab to see some young people getting into gardening in a big way, and i can see much potential in what they are doing.

On the way back up the glen I scrumped some Gaultheria fruits from the hedgerow! Surprisingly yummy. 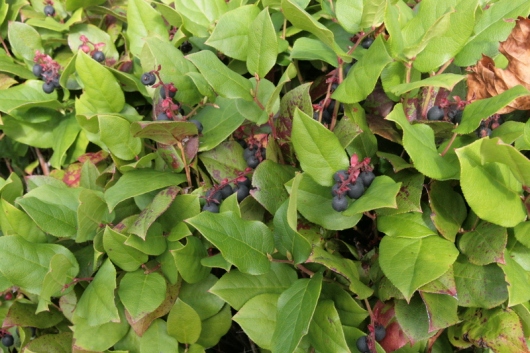 My final visit was to the Isle of Mull tea plantation ( well i presume it’s the only one) in Lochdon, a few miles south of  the ferry terminal at Craignure. Surprising how small the plants are, yet deliver such a valuable crop. On the way out i stopped to marvel at the row of pear trees ( and an apple) in the front garden of the school, absolutely weighted down with fruit. They are Scottish pears, on pear rootstock, and very productive. Have a glance into the school next time you drive by! I have seen big apple trees on Colonsay this year too, and remember well the fruit at Achamore Gardens on Gigha where i once worked.

We can can grow very good crops in the islands and glens of Scotland so long as we use the available shelter and microclimates. Getting the varieties right is an important factor, and looking to what does well in Canada, the Baltic states and Scandinavia will help.

Many thanks to those who showed me around, and i hope to be back to see the rest of the island soon!